Cars once again lined up for food bank distributions last week and will again Monday, as an economic and food crisis emanates from the COVID-19 pandemic.

With that in mind, Pittsburgh City Council members continued discussing visions for growing crops within every city district. One member brought forth a proposal to build an urban farm on “the perfect piece of property” with a community partner that has “passion.”

“If we’re serious about growing food, this is where to do it,” said Councilman Anthony Coghill, who represents District 4, including the Brookline neighborhood where he has set his sights on a 1.2-acre field adjacent to Brookline Memorial Park.

“It’s right smack dab in the middle of my district, and it can be an example of ‘hey, we can grow food in the city of Pittsburgh’ and, of course, give it away,” he said. 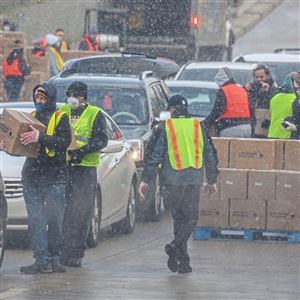 “Does it have sunshine? Does it have a water source? Does it have contamination? I’m hoping they’ll be able to find some cleaner sites for me,” Ms. Gross said, highlighting her district’s land challenges. “I’m really envious that District 4 has, we hope, a likely very clean green field, as opposed to a brown field.”

The proposal to enter into a $45,000 cooperative agreement with Grounded Strategies received an affirmative recommendation from council on Wednesday. Members are now waiting to hear back from the Peduto administration’s Law Department to learn whether entering into the agreement without issuing a request for proposal is legal — meaning that organization would be deemed a “sole” provider of the service in the city.

“[There are] some examples of when that’s happened, and [there are] also some concerns from some people that we don’t have a clearer picture on how those [agreements] have worked,” Council President Theresa Kail-Smith said.

Grounded Strategies provided Mr. Coghill and Ms. Gross with a 16-page proposal, including a cost breakdown for soil sampling as well as history of the Anderson family farm that used to be on the Brookline Memorial Park site.

“I don’t feel like this resolution looks any different than many other resolutions that similarly do work in our city parks,” Ms. Gross said, citing the city’s other cooperation agreements, including ones with the Pittsburgh Parks Conservancy.

She said Grounded Strategies has “longstanding experience in this particular niche.”

The organization formed in 2007 “out of the [Carnegie Mellon University] Heinz College through research on the economic impact of vacant land,” according to its website.

“The big goal is increasing food production,” Ms. Gross said. “Whether that happens in community gardens, or a public park, or on a new farm, or just expanding the capacity of existing cultivated land, I think we’re just trying to match the dollars and partners to each of those quadrants.”

An opinion from the Law Department is expected before council’s Tuesday vote, according to Mayor Bill Peduto’s office.

“Mayor Peduto has been a longtime supporter of urban farming and community gardens, and will continue to work with council on its proposals,” mayoral spokesman Timothy McNulty said.

Ms. Kail-Smith, who two weeks ago along with Ms. Gross and Councilwoman Erika Strassburger introduced an initial urban farming bill, said that, regardless of the legal opinion, she wants to aggressively pursue gardens as a source of food for residents affected by the pandemic.

“What I said to my colleagues is, I don’t care how we get there; I just want to get there; I want to put down the books, put down the legislation, pick up some shovels, get the plants and get some things done for the community. These are things that should have been in place for decades. There’s no reason for the city of Pittsburgh, with all this vacant land, that we don’t have an urban farm in every district,” Ms. Kail-Smith said.

The council’s president has two other urban farming bills winding their way through that body.

She continued: “… My mother lived through the Depression. She’s 98 years old. She said ‘Get your canned goods, get your pantry started, get your garden started. That’s what I would tell people.’”